Spontaneous intracerebral hemorrhage (ICH) is a major public health problem affecting 2 million people worldwide each year. It is a devastating disease; up to half of the affected patients die within 30 days and the majority of survivors are permanently handicapped.

Why is ICH so devastating?

Decompressive craniectomy decreases intracranial pressure without further damage to the vulnerable brain. During this procedure the bone of the skull is removed, enabling the brain to expand and thereby reducing intracranial pressure. Decompressive craniectomy is a well-established treatment in patients with large ischemic strokes (major trials: DESTINY, HAMLET, DECIMAL). 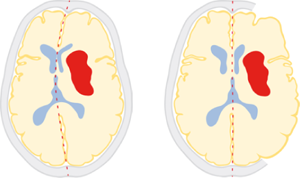 The Neurocenter Bern is a leading international neurovascular center with the largest number of highly-specialized interventions in Switzerland, including the endovascular clot retrieval after ischemic stroke. In a combined effort between centers in Bern and Geneva, the new treatment concept of decompressive craniectomy after intracerebral hemorrhage has already been successfully applied and results have been published in a major international journal (Stroke) in 2012. This Swiss trial showed that the new treatment is feasible and safe. This trial showed promising effects with regard to mortality and outcome. Based on these results and lively discussions among specialists in Switzerland, we planned to conduct a prospective randomized trial on this new treatment concept. 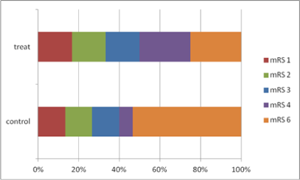 Aim of the study

The study will be conducted in major European stroke centers.

The primary outcome is the composite of mortality or dependency at 6 months after treatment (mRS 5 and 6).

Sample Size / duration of the trial

As shown in our recent feasibility study (Fung et al. 2012) the proportion of patients with an unfavourable outcome (mRS 5-6) was 0.53 in the control group. Thus, a total sample size of 300 patients will provide over 82% power at a two-sided α level of 0.05 to detect a relative risk reduction of 33% using a Chi-squared test. With 4 major stroke centers participating in Switzerland (Bern, Geneva, Lucerne, Lugano) and sites across 6 European countries (Germany, Austria, Spain, the Netherlands, France and Finland), it is clearly feasible to conduct this trial in the planned time period. Randomization of the patients started in October 2014 and will end in September 2020. After completion of the follow-up period of 6 months, the primary outcome data will be collected in March 2021, with publication of the results anticipated in summer 2021.

The Swiss National Science Foundation has approved a grant over CHF 520.000 in September 2013. In addition funds were granted from the Swiss Heart Foundation (CHF 100.000) and Inselspital Bern (CHF 80.000).

The idea of using decompressive craniectomy for treatment for ICH is increasing throughout the neurosurgical and neurological community. Shortly after publication of our preliminary results in “Stroke” last year, three new studies were published focusing on decompressive craniectomy in ICH. In addition, our results were reported in the non-scientific media, which should help to improve awareness of this devastating condition.

Here is what literature says about our concept:

—Prof. Dr. W. Hacke, meeting of the German Society for Neurology and Neurosurgery in Mannheim 2010.

“These findings suggest that a randomized controlled trial of decompressive craniectomy after ICH is warranted.”

“…preliminary data supports the need for better controlled studies addressing the role of this (hemicraniectomy) surgical technique in ICH patients.”

“Further evaluation of this method to reduce mortality in ICH patients is warranted.”

“… but DC ameliorates the mass effect exerted by the ICH plus the perihematomal edema (PHE).”

“… Edema growth is an important Treatment target for strategies to improve Patient outcome.”

The SWITCH- trial has been endorsed by the Stroke Alliance For Europe (SAFE).